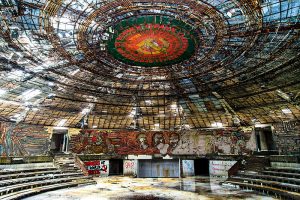 “House of the Bulgarian Communist Party” or Buzludzha Monument is bult on Hadzhi Dimitar peak and opened on August 23, 1981. The largest ideological monument in the country, highly valued and revered by the Socialists, was sealed and left to collapse after the changes in November 1989. Entry into the building is currently prohibited because of the danger posed by the collapsing elements in it. In 2013, the monument was included in the ranking of myscienceacademy.org – “The most beautiful abandoned places in the world”.

The construction of the monument is a domed ritual hall resembling an urn for sacrificial fire. The ceremonial hall is 42 m in diameter and is 14.5 m high. The total area of the mosaic with which it is decorated inside is 550 m2. White crystal glass compositions adorn the three internal staircases. A 70-meter tower, symbolizing a waving party flag with a 12-meter red star at the top, rises to the main structure, and by 1989 it had glowed at night. The entire monument was also spectacularly lit.