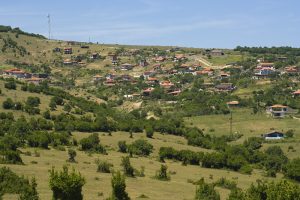 The village of Emona is located 1 km from the seashore in the northern part of Cape Emine – the easternmost point of the Balkan Mountains and the place where the Kom – Emine hiking route ends. The small village, whose population today is only a few dozen people, has an ancient and glorious history. In the Iliad of Homer the place is mentioned as the birthplace of the Thracian king Rez.

During the Middle Ages, the area was a highly developed maritime center. Evidence of this are the remains of the medieval fortress Paleokastro, discovered at the end of the 19th century during the construction of the Cape Emine lighthouse, which are now almost obliterated. Another historic monument remains preserved – the beautiful stone church “St. Nicholas”, located about a kilometer away from the village, which was part of a monastery complex.

During the Ottoman Empire, centuries-old oak forests were cut down and today the area is completely deforested. After the Liberation from the Turkish yoke, the inaccessible port remained away from the turbulent economic development of the Principality of Bulgaria, and during the socialism it becomes a border zone with restricted access. Nowadays it is still difficult to access because of the destroyed infrastructure. All this has kept the area unaffected by the industrialization and chaotic overbuilding of the Black Sea.