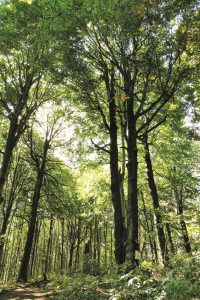 Deliradevata Buka is a venerable beech tree growing 7 km east of Vratnik shelter, on the ridge path. It’s named after Radi Todorov Muhtarov (Deli-Radi) from the village of Neykovo who was a figther in Stoil Voyvoda’s guerrilla unit. Hiding behind that tree he shot at Turkish soldiers and killed many of them. He was killed by the enemy at Harembunar peak during the April Uprising in 1876.

The name of the beech tree has no relation whatsover with Pavel Deliradev – the first traveller from Kom peak to Emine Cape in 1933.