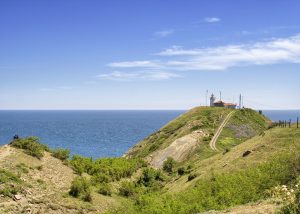 Cape Emine’s lighthouse is built on a rocky, steep bank, jutting out 70 meters into the sea. It is the easternmost point of the Balkan Mountains and the end of the Kom – Emine hiking route. Tourists finishing their hike here can view the interesting cylindrical lighthouse building only from the outside. Visitors are allowed inside only with special permission.

Cape Emine’s lighthouse is strategically located. Strong winds blow here, often changing their direction, and the sea is shallow with many underwater cliffs that pose risks to passing vessels. Therefore, as early as the Middle Ages, ships were warned of the danger by light signals.

The current lighthouse building was built in 1880 at the easternmost point of the cape, which is separated from the Balkan Mountains by a deep ravine. This was supposed to have been a protection moat of the Paleokastro medieval fortress discovered during the construction. This relief of the terrain still makes the access to the facility difficult.

The lighthouse was built and equipped by a French company for construction and maintenance of lighthouses and works with French optical equipment, first on gas and then on acetylene. In 1962 it was electrified and refurbished with electrical optics. The headlamp tower is 9.4 meters high, and the light, which flashes at intervals of 6 seconds (flare 1.5 sec; darkness 4.5 sec), is visible 20 nautical miles into the sea.